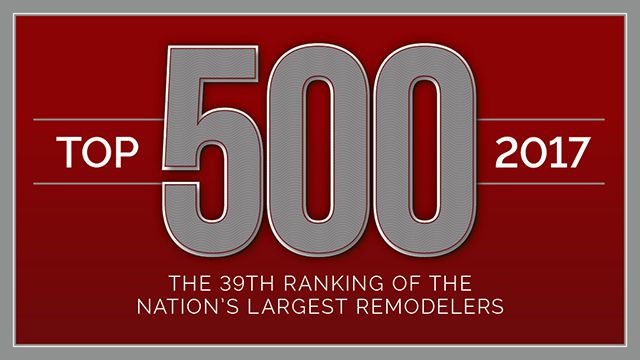 Qualified Remodeler, the premier publication serving remodelers and home improvement companies in the United States, has selected Winston Brown Construction as one of the Top 500 remodelers of 2017. Since 1978 the QR Top 500 has tracked the industry’s largest and most successful companies.

Winston Brown Construction was chosen as a 2017 Top 500 remodeler by the Qualified Remodeler editorial staff for meeting a set of criteria including installed remodeling dollar volume, total years in business, industry association membership, industry certification, industry awards and community service. 2017 marks the 19th year Winston Brown has been named to this prestigious list.

The Top 500 ranking is the home building industry’s top recognition program, produced by Qualified Remodeler magazine, the largest and oldest audited magazine in the trade. Qualified Remodeler publishes the annual ranking list as the feature piece in the August issue of the national trade publication. The Top 500 list is the longest running recognition program in the remodeling industry. The annual ranking is CPA-Audited analysis of the financial performance of remodeling businesses throughout the United States.

Additional information on the Top 500 can be found in the August issue of Qualified Remodeler and at www.qualifiedremodeler.com.

Established in 1974, Winston Brown Construction is an award-winning industry leader with an outstanding portfolio of design and remodeling in Topeka and Lawrence. Their unique process for design-build remodeling delivers distinctive designs and successful builds that result in remarkable client satisfaction. Winston Brown looks at each and every project as a new opportunity to excel and set new standards for the remodeling industry.