Article by Linda Ditch, Freelance Writer for the Topeka Capital-Journal 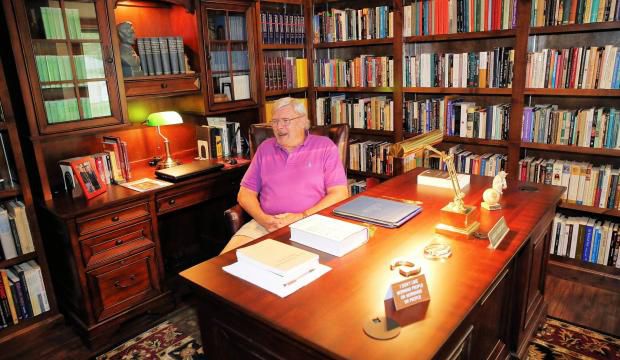 When you walk into Barry Crawford’s new home office, the style meets your expectations of a room built for a newly retired Washburn University professor of philosophy and religion. A large, dark-wood desk and leather chair take center stage, with a matching hutch placed behind. A leather club chair is placed by the corner windows for comfortable reading or an office visitor. Every inch of wall space contains loaded bookshelves.

However, there are hints to a humorous side of Crawford along with the serious books, world globe and busts of President Abraham Lincoln and scientist Albert Einstein. 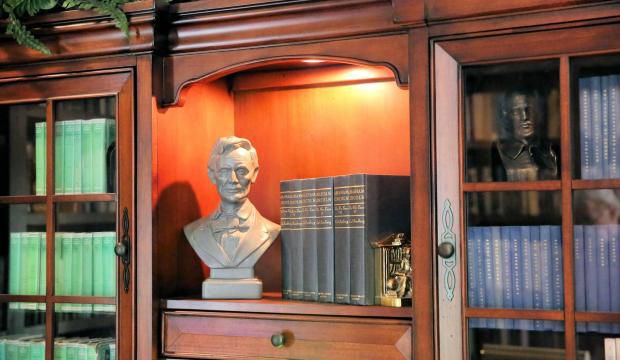 A bust of Abraham Lincoln finds its place on a shelf alongside books about the U.S. president.
Shelving matches the dark wood furniture Crawford purchased for his office.
(Keith Horinek/Capital-Journal)

The first clue is a jar labeled as containing the ashes of former students. Then there is the small figurine of the “Star Wars” character Yoda on one corner of his desk, with a sign on the other corner saying, “I don’t like morning people, or mornings, or people.”

“This is my sanctuary,” Crawford said. “I’m thinking of putting a sign above the doorway with the quote from Dante, ‘Abandon all hope, ye who enter here.’”

Crawford had a very practical reason for the home office. Although he retired from 38 years of teaching, he still plans to keep up in his academic field, which means research and writing. In fact, a book he co-edited, “Redescribing the Gospel of Mark,” was recently published. 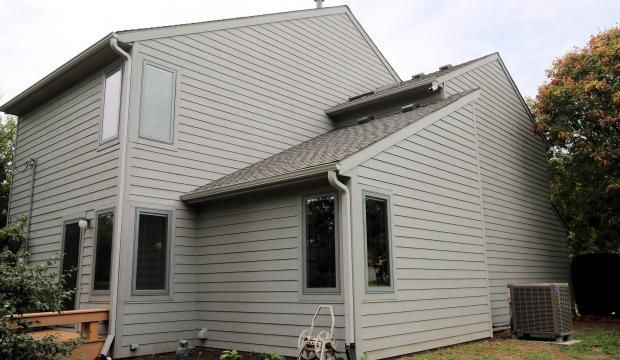 Winston Brown Construction was able to make the office addition look like it was part of the original
house, both inside and out. (Keith Horinek/Capital-Journal)

The new space required an addition to the home Crawford built in 1987. He turned to Winston Brown Construction for the project. The construction company crew was able to make the new room look like it was part of the original house, both inside and out.

When they heard about the need for shelves to hold all of Crawford’s books from his Washburn office, they had him take photos of the collection to create a plan. One option they proposed was a two-story office with floor-to-ceiling bookshelves, a sliding library ladder and a spiral staircase, but Crawford felt a one-story room was enough.

However, he did follow their suggestion of using dark wood stain on the shelves, which matches the desk and hutch he bought at Nebraska Furniture Mart.

The Winston Brown crew started work in March and finished in May. The room’s entry features a glass-paneled pocket door, and its windows have the blinds inside between the glass. 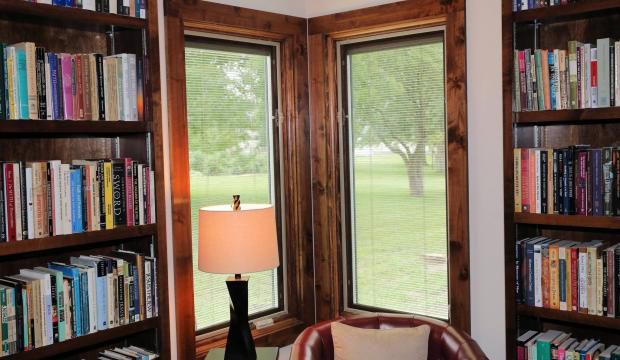 Corner windows have blinds between the glass. (Keith Horinek/Capital-Journal)

Crawford was talked into a ceiling fan, and he’s happy he listened. He pointed out the Winston Brown crew knew what they were talking about when it came to project suggestions. One example was an electrical outlet with a brass cover that comes up through the rug under the desk.

“I had mapped out the electrical outlet on the floor, because I didn’t want a lot of wires running from my desk,” Crawford said. “They said I needed to move it another 6 inches into the middle of the room. I thought it would be too far, but I went with their suggestion, and they were right.”

As for all of those books, just how many are there? Crawford doesn’t know for sure, but he guesses about 15,000. He moved all of them from Washburn himself — all 99 boxes — a few at a time. And he admits, with a smile, “No, I haven’t read every one of them. I might have read a lot of them, but there’s not much I’ve retained from a lot of them.”

As far as working with Winston Brown, Crawford said he was pleased with the experience and the end result. He noted they were careful about keeping the dust from construction quarantined to the work area.

His wife also had the company do some updating to the kitchen by removing wallpaper, painting, refinishing the wood floors and installing new light fixtures.

Would Crawford change anything?

“Maybe I should have got a smaller desk,” he said. “If I had anything else to do, I’d call on Winston Brown. Now, whether or not they’d want to do another project with me is another matter.”